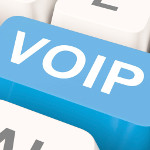 Com Computer can evaluate your needs and pair the best-fit VoIP solution for your business. Our solutions are scalable to accommodate your company’s growth.
Voice over IP (VoIP) is a methodology and group of technologies for the delivery of voice communications and multimedia sessions over Internet Protocol (IP) networks, such as the Internet. Other terms commonly associated with VoIP are IP telephony, Internet telephony, broadband telephony, and broadband phone service.

The term Internet telephony specifically refers to the provisioning of communications services (voice, fax, SMS, voice-messaging) over the public Internet, rather than via the public switched telephone network (PSTN). The steps and principles involved in originating VoIP telephone calls are similar to traditional digital telephony and involve signaling, channel setup, digitization of the analog voice signals, and encoding. Instead of being transmitted over a circuit-switched network, however, the digital information is packetized, and transmission occurs as IP packets over a packet-switched network. Such transmission entails careful considerations about resource management different from time-division multiplexing (TDM) networks.

Early providers of voice-over-IP services offered business models and technical solutions that mirrored the architecture of the legacy telephone network. Second-generation providers, such as Skype, have built closed networks for private user bases, offering the benefit of free calls and convenience while potentially charging for access to other communication networks, such as the PSTN. This has limited the freedom of users to mix-and-match third-party hardware and software. Third-generation providers, such as Google Talk, have adopted[1] the concept of federated VoIP—which is a departure from the architecture of the legacy networks. These solutions typically allow dynamic interconnection between users on any two domains on the Internet when a user wishes to place a call.

VoIP is available on many smartphones, personal computers, and on Internet access devices. Calls and SMS text messages may be sent over 3G/4G or Wi-Fi.

Have questions about the benefits VoIP s can offer to your business? Contact Com Computer at (416) 512-1208 or email us at sales@comcomputer.com